All Together Now: CloudBlue

At this week’s Ingram Micro’s Cloud Summit conference for partners, MSPs and resellers, a new line of business called CloudBlue was announced and released into the wild whacky world of cloud computing. My take is CloudBlue basically aggregates a lot of existing Ingram Micro cloud assets under one umbrella. It is considered a new division within Ingram Micro and Microsoft is a significant strategic partner in this solution. Microsoft declined to specify if it was a financial investor.

Almost two and a half years ago, Ingram Micro acquired Odin (the successor brand to Parallels). While I’ve covered that in the past, Odin brought a line of work to Ingram allowing ISVs, Distis and entrepreneurs to create a cloud marketplace with provisioning, billing and support. In many ways I thought that interesting in that I liked Odin as an independent solution that could serve other distributors such as D&H Distributing plus its really strong research arm that published excellent primary research. Over the past couple of years, I felt we had “lost” both the independent platform and research with the Odin acquisition; CloudBlue now clarifies what “happened” to Odin and brings the platform back to the center of attention.

In an interview with Richard Dufty, Executive Vice President of Ingram Cloud, he stated that CloudBlue brings together a rich set of assets in the Ingram Micro family in a multi-year development effort.CloudBlue has the following components:

You can see in Figure 1 showing a significant resource commitment in terms of money, time and labor. You can also get a sense of the CloudBlue scale, scope and geography.

In another private meeting with Ingram Micro executives, it was noted that CloudBlue will endeavor to offer a customer-facing self-service portal. I called BS as it has been my (admittedly biased) experience that technology self-service is an oxymoron (customers are lazy IMHO). But the upside for CloudBlue is that I believe partners and MSPs will be in continued market demand; this stuff doesn’t just happen on its own. Self-service is over-rated.

Developers are the New Rock Stars

An inherent assumption concerning CloudBlue is the focus on intellectual property and DevOps. This is less of an infrastructure play and more of a app bolt-on play. It’s a natural progression as they aren’t making servers like they used to buddy boy. It creates a challenge for us Big Iron server-side guys as we’ll need to continue our own transformative journey to recreate and reinvent ourselves. Look at Figure 2 and observe the CloudBlue architecture and design. This is showing the internals with an emphasis on API-based connectivity. 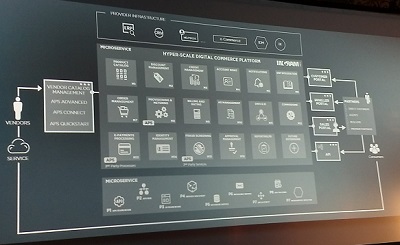 Figure 2: Get Your Geek On!

The Ingram CTO who presented the CloudBlue architecture emphasized ease-of-use in API creation and integration but I’ve had my fingertips burned in software development projects so I’ll withhold judgement until I learn more about CloudBlue. At the core of the CloudBlue ecosystem, is its proprietary API technology, APS, which customers can use to immediately connect to CloudBlue’s network of vendor solutions, enabling them to offer these vendor solutions in conjunction with their own core services quickly and easily. CloudBlue provides a single entry point to an ecosystem of the world’s most innovative ISVs, including more than 200 pre-integrated solutions from Microsoft, Dropbox, DocuSign, IBM, Cisco, Symantec and many more.

BTW – you can revisit a past blog on Slingr’s “Platform as a Service” play that provides additional context on API integrations and the bolt-on concept here.

A woman who most recently was a CMO inside a Big Data organization once told me what her takeaway was from her graduate school experience (MBA): learning how to scale. Agreed as MBAs are typically oriented towards enterprises and not entrepreneurs. Adopting the same MBA-like mindset, I’d concur with Ingram Micro’s assertion that CloudBlue’s raison d’être is rapid sales scalability (CloudReferral; CloudMarketplace; CloudPremium). It’s “graduate school” for the merchant and reseller class. You can see BlueClouds scalability intentions in Figure 3.