I’m a guy and of course delay going to the dentist and so on. Over morning coffee, today March 31, 2018, I realized I can’t avoid it any longer. Today is World Backup Day! Darn it,  I’m making a couple special backups just to honor the holiday.

I spoke with John Zanni, well-known in the SMB partner channel for his work as a Microsoft general manager back in the day plus his tenure at Parallels. Today he is the president of Acronis, a leading backup solution ISV. Later in this blog I’ll do a “where is John Zanni now?” commentary.

“This is of course an international event, not an Acronis event. It is to remind people that many attacks happen on April 1st as it’s April Fool’s Day. You want to make sure you are fully-protected on March 31st.” Zanni shared. “The important part is that backup isn’t good enough anymore. You need to have ‘secure backup’ which means making sure your system is up-to-date. You need have the latest anti-virus, anti-spam solution and you have a strong anti-ransomware solution. The good news is that all of our of products come with Acronis active protection that is AI-based anti-ransomware.”

But wait! There is even more good news. Even if you don’t have the Acronis backup solution, you can get just the active protection piece for free from the Acronis website. 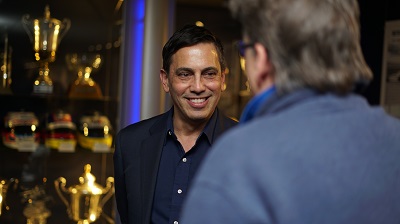 • Nearly 39 percent of the respondents have four or more devices in their household, meaning more end points and data to protect

• Over 29 percent of the respondents experienced data loss

A prediction on the future of secure backups? Zanni offered that the quantity of data being generated by the emerging Internet of Things (IoT) segment will require a focus on secure backups. “The trick is how do you have IoT data backed up locally, in transit and at rest in the cloud so it can be analyzed.” Zanni offered. “An example of extensive amounts of IoT data relates to our race car sponsorship with Williams Martini Racing.”

For those living in a cave and don’t know, there is a European Union data privacy protection regulation coming in late May 2018 called the “General Data Protection Regulation” (GDPR) that will impact MSPs.  “It’s coming fast but it’s not as complex as you think; but it’s important you understand the GDPR requirements. We have a webcast that tries to bring GDPR to the masses.” Zanni said. “With a good backup system, you are already 80-to-90 percent of the way there towards GDPR compliance. But the responsibility of “process” rests with the MSP and the client. Acronis cannot help there. That said, we are adding some features in May to cover some of the secure data backup storage GDPR scenarios that we can impact.”

Zanni extolled that “by no means should anyone ignore GDPR; the government(s) will be going after violators such as businesses who are not GDPR compliant. Individuals clearly understand that they have a right to control their data and will insist on the GDPR-type protection.” More on GDPR over the next several weeks – I promise.

So here is the net-net on Zanni and Acronis.

Moved to Europe (Acronis HQ in Switzerland from Boston.

Zanni is overseeing the 15th anniversary of Acronis.

Acronis – has now moved its full product stack to the hybrid cloud architecture, folly scalable to run in your data center and/or our cloud.

MSPs adore the multi-tier, multi-tenant Acronis approach, according to Zanni.

Growth – core business (on premises sold through distribution); is growing at low double digits.MSP business is growing over 100% year over year with 5,000 transacting partners and heading to 12k+ by 2020.

MSPs like the model we have both in terms ease of onboarding/getting started and as well as the commercial terms (which are very simple – mostly per gigabyte per month).