On the Surface Microsoft Just Might Have a Winner 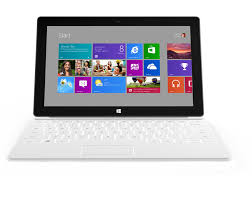 Microsoft yesterday announced its new Surface Consumer Tablet. With a sleek design and great specs; it just may be a winner. Microsoft has done very well with the Xbox 360, but other consumer products it has released haven’t fared so well in the recent past. Some of these consumer products include Windows Tablet, Microsoft Zune, and the kin phone, all of which were released with great expectation only to be snubbed by consumers.

As for the specs; the surface will release with an Intel i5 processor in a windows 8 Pro, and Windows RT version, the RT being an ARM enabled version of the OS. 64GB or 48GB of Ram will be available in the Pro version, where the RT model will have 32GB or 64GB of available storage. A 10.6 inch screen gives added real estate over the strongest competition iPad’s 9.7 inch screen. The RT device weighs in at less than 1.5lbs, where the Pro gets a little more weight at less than 2lbs. The entire device is sleek and has some additional features that have been missing from the iPad.

The Microsoft Surface comes with a built in kickstand which allows the unit to sit up like a notebook, and also has an apple like smart cover that adds a slim Qwerty keyboard built in to the magnetic cover, providing extra functionality in a similar amount of thickness. The most exciting feature is the addition of a USB port and HDMI port, providing this alongside the full blown operating system just may give businesses the replacement device they have been looking for.

Price has not yet been set but is speculated to be in the same range as the iPad line. Release date is also not clear but we would expect it to be released before Christmas. We also have question whether the Surface will come with mobile data options, as this may be very important to users on the go. It will be interesting to see if Microsoft can pull this one off. If they provide a solution that allows complete interoperability with the OS without locking down functionality or options, they just might have a winner.